The mystical sandstone city of Petra has entranced and enthralled travelers for ages. Famously described as “a rose red city half as old as time,” the stunning UNESCO World Heritage site served as the capital of the powerful Nabataean kingdom between 400 B.C. and A.D. 106. The Nabataeans used the city to command the trade routes from Damascus to Arabia, collecting taxes and protection money from the spice, silk and slave caravans passing through.

With its fascinating cliffside palaces, temples, tombs, storerooms and stables, Petra is without a doubt the most popular tourist attraction on any tour of Jordan. Though the fabled site was rediscovered back in the 1800’s, much still remains unknown about its history and archaeology. Here are five things you may not know about one of the new seven wonders of the world.

Several scenes from the legendary blockbuster Indiana Jones and the Last Crusade were filmed in Petra. In the film’s climactic final scenes, actors Harrison Ford and Sean Connery burst forth from the Siq and walk deep into the labyrinths of the Treasury to find the Holy Grail.

The ruins of Petra were hidden to most of the world until the Swiss explorer Johann Ludwig Burckhardt disguised himself as an Arab scholar and infiltrated the Bedouin-occupied city in 1812. Burckhardt’s accounts of his discovery inspired other Western explorers and historians to visit the ancient site, helping the lost city to become known to archeologists and travelers across the globe.

Turns out its not just cameras that have been aimed at the ruins of Petra. Several bullet holes on the facade of the Treasury were caused hundreds of years ago by Bedouin tribesman hoping to uncover riches that they believed were hidden within. The giant urn carved above the Treasury bears the most bullet marks as it was believed to be holding riches inside. In reality, the urn is one solid piece of stone. Nice try, guys! 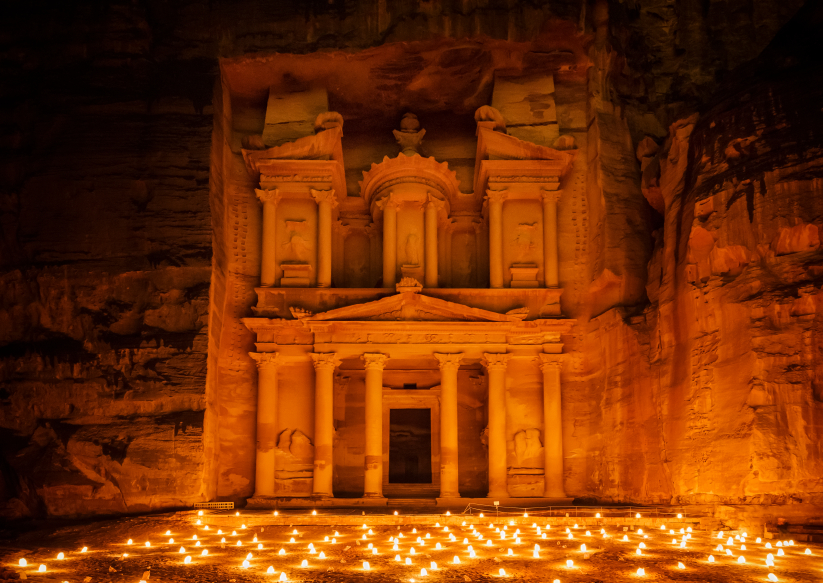 Petra is said to contain 800 carved tombs, but 80 percent of the original carvings are thought to be lost. Today only about 15 percent of the city has been uncovered, and the vast majority still lays hidden and untouched. Archeologists continue to unearth new finds, providing clues around life in Petra during its richest era.

The Treasury, though most recognizable, is not the largest structure in Petra. The Monastery, at 50 meters wide and 45 meters tall, is far bigger and in many ways much more impressive. The climb to this great structure is approximately 800 steps, rewarding spirited climbers with crowd-free views of the area. A further climb will bring tenacious travelers to a spectacularly large urn site featuring a jaw-dropping 360 degree view of the ancient city.

Check Out Our Tour Company Now!

Hiking in the Bernese Oberland

Ski across the country in Norway