100 Miles of Wild: A Tour of Madagascar’s Great Tsingy

100 Miles of Wild: A Tour of Madagascar’s Great Tsingy

Located over 1000 miles east of Africa, Madagascar (4th largest island in the world) is as exotic a destination as you could imagine. Formerly a French colony, the island famous for its unique plant and animal species (particularly lemurs, a threatened primate found only on the island) – having evolved over its 200 million years of isolation from the mainland. While its tourism industry is still in its infancy, thanks to DreamWorks, it’s also a country whose name is on the tip of every parent’s tongue recently due to the Madagascar cartoon trilogy (aka cat-nip for children). Check Out Our African Safari Tours!

It made its way onto the exploration radar due to its unique blade-like limestone formations called “Tsingy”, found in the western part of the country. Loosely translating as “place where one cannot walk barefoot”, it’s an apt descriptor for the unmapped region, which is also home to one of the planets largest remaining tracts of intact, sub-tropical dry forest. This forest, which is protected as a UNESCO world heritage site and national park, is also home to a high density of lemurs and other plants and animals threatened across much of Madagascar due to habitat loss.

Generously supported by Kensington Tours and Delta Airlines, this expedition (also recognized as a flag worthy project by The Explorers Club) saw a twenty person team led by Kensington Tours’ Explorer In Residence Simon Donato, Kensington Explorers’ George Kourounis, Travis Steffens, and the Adventure Science Team, adventure into an unexplored region of the Tsingy de Bemaraha Strict Nature Reserve, which is an area closed to tourists, and only available to qualified, permit carrying research teams.

The expedition team hoped to accomplish several major goals during this three week project: The primary goals were to explore the Tsingy in search of undiscovered caves, explore regions within the Tsingy thought to host dinosaur tracks, explore the Tsingy caves for archaeological sites, and to conduct lemur surveys daily. Aside from a potentially life-threatening survival situation which which saw three team members rescued by the Malagasy military early into the expedition as they conducted a reconnaissance survey, the project was a tremendous success, with all goals being met. The following images illustrate of some of the memorable moments, significant findings, and cool observations made during the expedition.

1. Heading west from Antananarivo, the degree of deforestation and erosion is staggering when viewed from the air

2. The team trekking through the forest towards the Tsingy on their daily survey 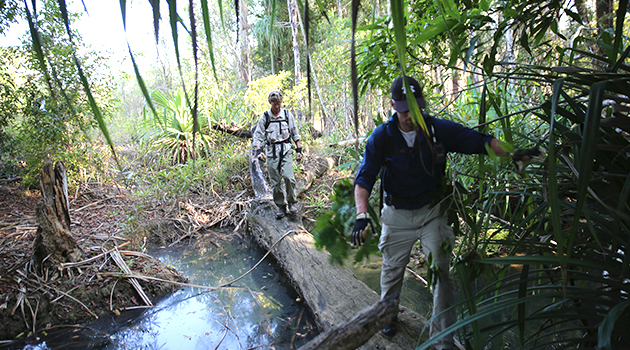 3. A team member explores one of the many grikes (channels) in the Tsingy 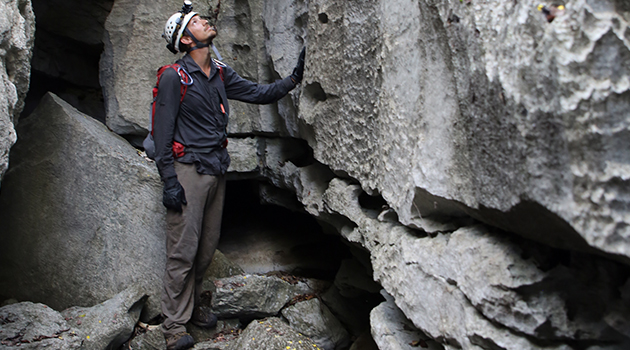 4. The field team posing with Flag 112 of The Explorers Club 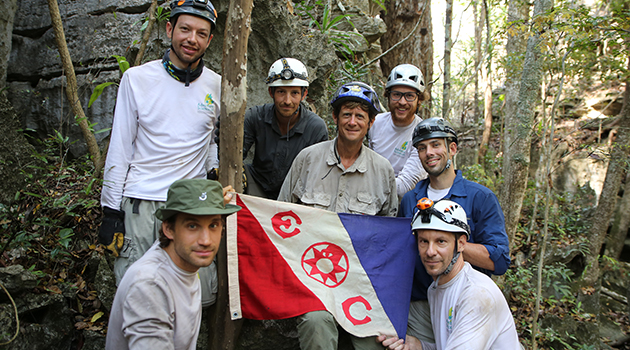 5. Two team members examine an intact clay pot (~400 years old) found inside one of the caves in the survey area. 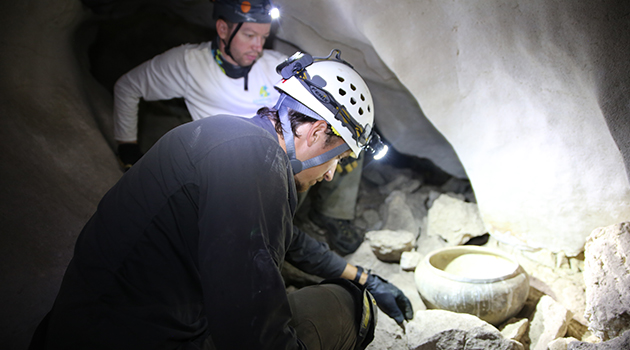 6. Photos and observations were made of the archaeological find, but it was ultimately left in the cave in which it was discovered. 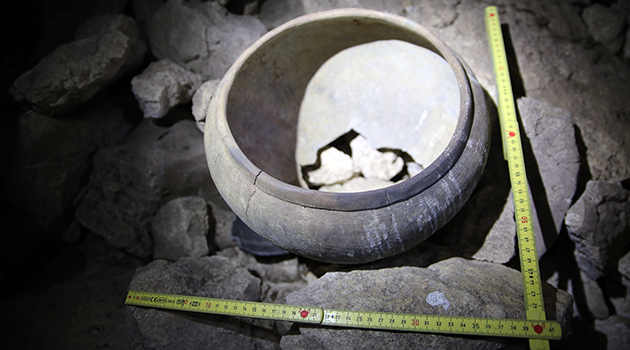 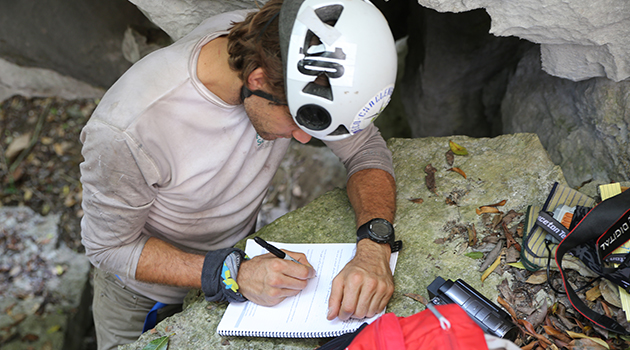 8. The Team preparing to explore an underwater river found in a cave. 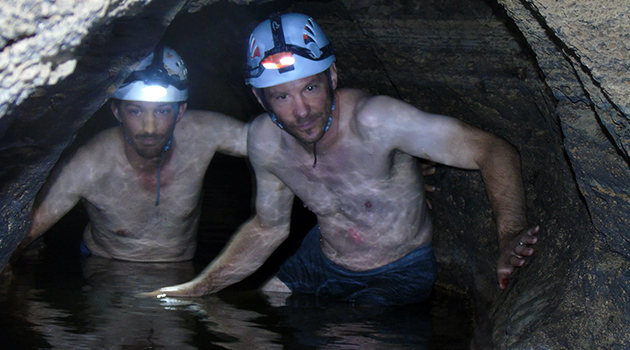 9. Member crawling through passage with a low ceiling inside of the cave they discovered and gave the Malagasy name Anjohibetsara (big, beautiful) cave. 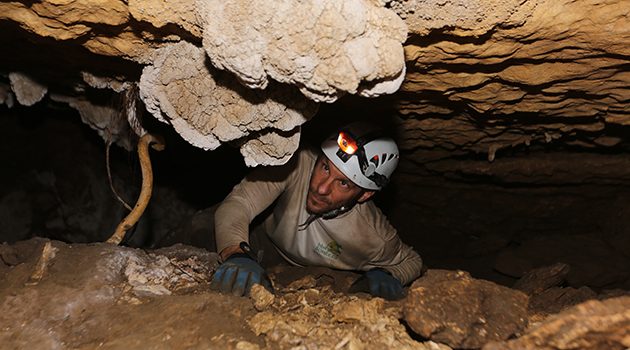 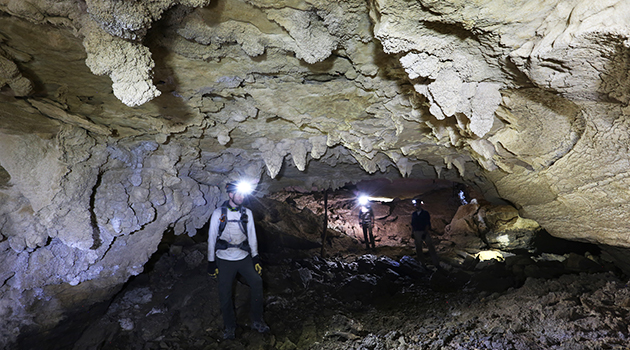 11. Anjohibetsara cave contained some very high and wide passages. This image was taken at a location named “Grand Central Station.” 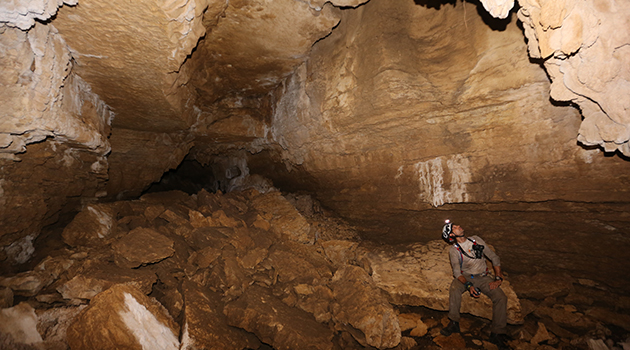 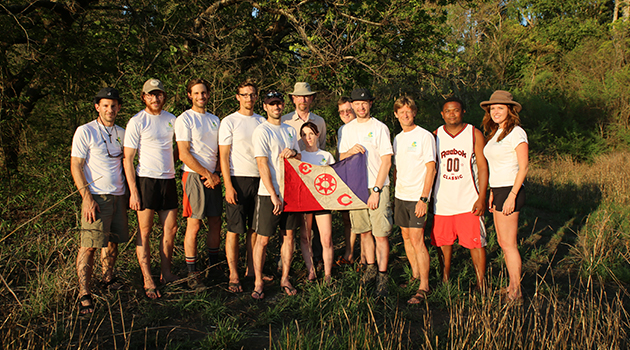 13. With no light pollution, the night sky was always spectacular. 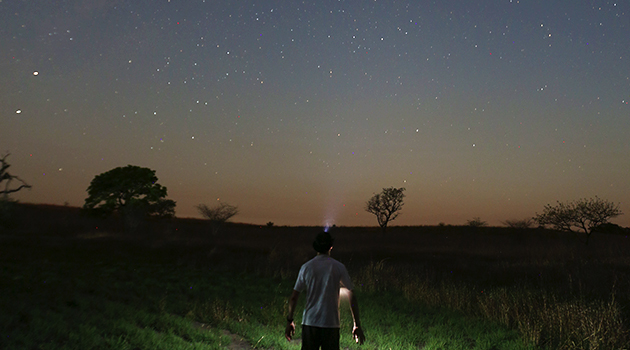 14. Much of the deforestation in the region is due to burning forest to provide grazing land for the revered zebu (cattle). 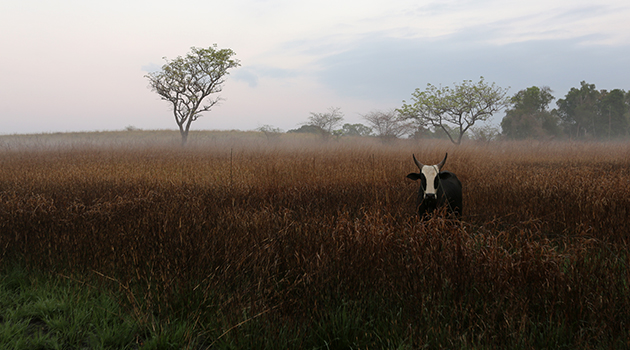 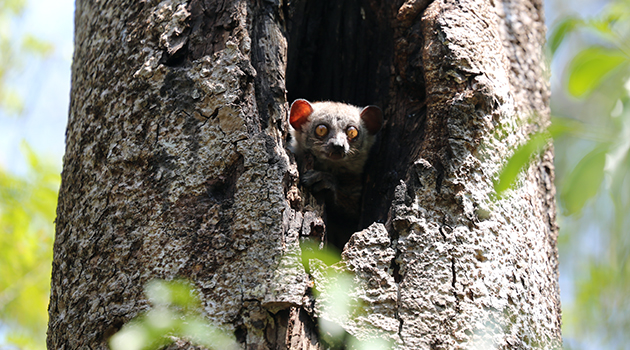 16. The Tsingy rock is as sharp as a blade in many locations 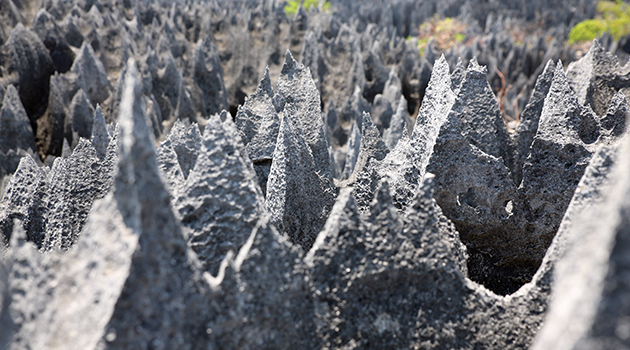 17. Travel through the Tsingy requires focus and confidence, as a misstep could result in a severe injury. 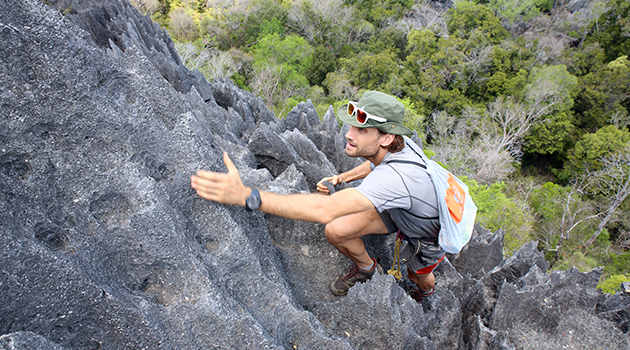 18. A team member stands amid the sharpened limestone pinnacles of the Great Tsingy 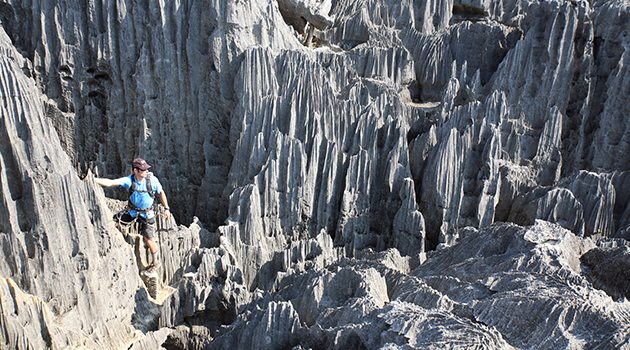 19. An endangered crowned sifaka watches the team from its lofty perch 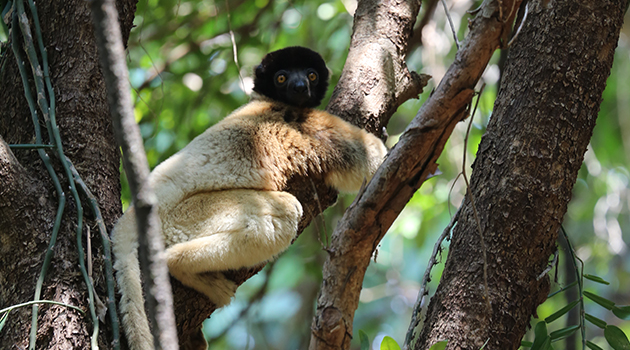 20. Two team members stand by the fire they lit to signal the rescue helicopter sent for them 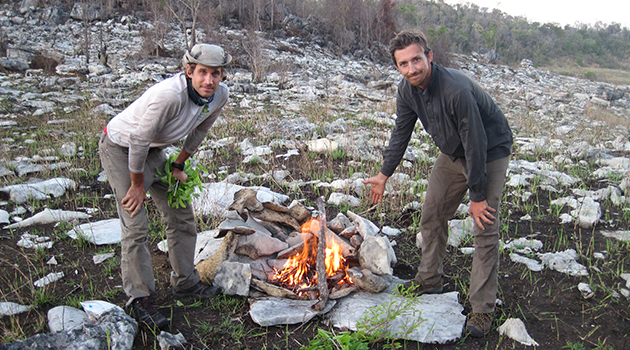 21. Four team members posing near the dinosaur tracks they discovered 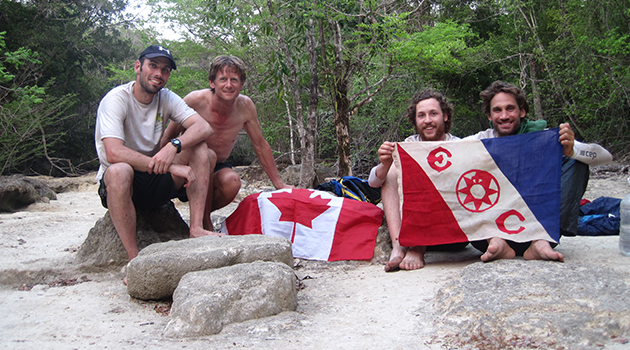 22. This dinosaur trackway was made over 100 million years ago by a bipedal dinosaur, and represent the most northerly known dinosaur tracks in the Tsingy. They also add important information for palaeontologists working in the country. 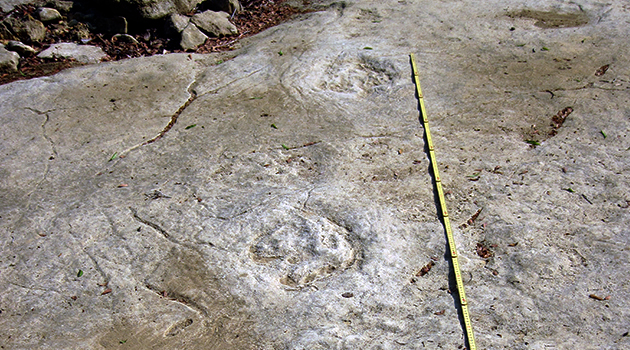 23. An excellent example of a dinosaur track discovered by the team in the Tsingy 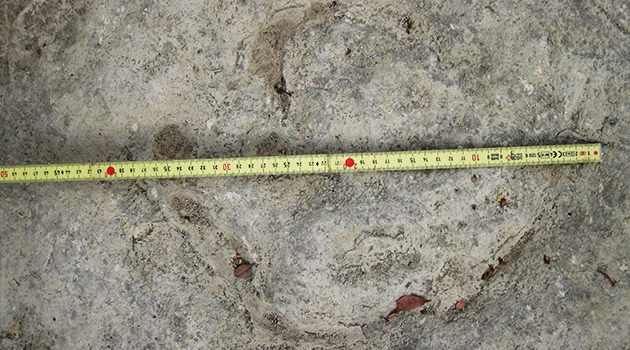 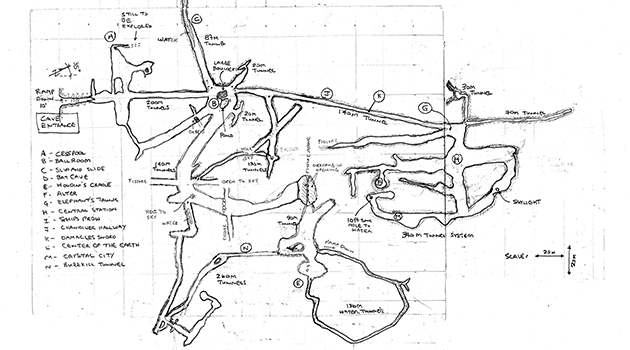 25. Giant millipedes were common in the Tsingy forest and when distressed, would excrete an ink like substance that would stain skin and clothing 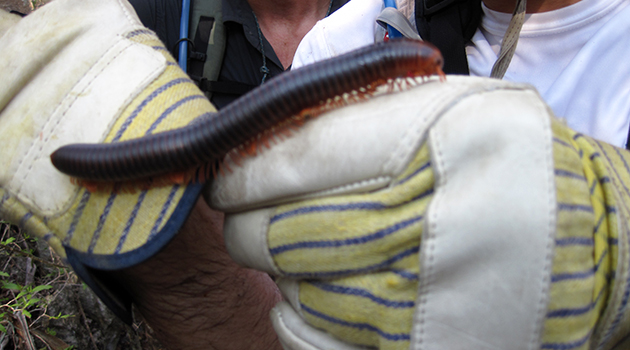 This is just the East side of Africa. See South African Safari here.